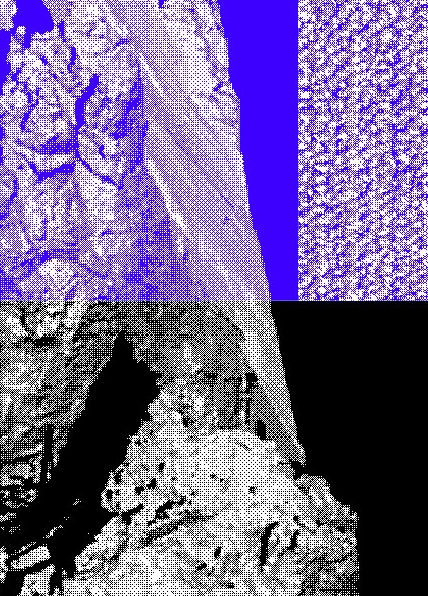 On a daily basis our bodies are being scanned, tracked, debugged, rendered, manipulated, and categorized by different technologies. How are we, as users and makers, able to understand our bodies' relationships to these biometric computational processes? Inefficient Tools for Quantified Beings is a process-driven exhibition curated by the Hackers & Designers collective (H&D), which investigates the intersection of technology and the agency of the (human, post-human, trans-human, non-human) body from a maker's perspective. The featured artists are Nazanin Karimi, Thomas Rustemeyer, and The Underground Division (Helen Pritchard, Femke Snelting en Jara Rocha). Engaging with technologies such as scanners, geocomputation, and 3D modeling, the exhibited works problematize the role of the 'body' in computation. In collaboration with architectural designer Thomas Rustemeyer, H&D developed a support structure which hosts the works of the invited artists. The structure reflects the ways in which H&D functions as a community, a network, and an infrastructure. Different local networks function as a resource library in the exhibition. Visitors can access the resources and research that went into each of the works by logging into the specific hotspots.

About Hackers & Designers
Hackers & Designers (H&D) is an interdisciplinary collective ‘body’ that functions as a network, an infrastructure, a host, and a facilitator for makers who come from different disciplines (art, design, computer programming). By initiating a diverse range of encounters that involve hands-on making, H&D aims to create opportunities for makers to meet and collaborate. H&D also makes educational resources available to the public by documenting and publishing tools, technologies and processes that are used and produced during workshops.

This exhibition and program would have not been possible without the kind support of Tetem, Stimuleringsfonds Creatieve Industrie, and Het Amsterdams Fonds voor de Kunst

The NDSM area is, and has been since the establishment of artists in the north of Amsterdam, strongly future-oriented. That is a healthy attitude as systems that focus on the past tend to get stuck in their own present

The future of the NDSM-Wharf has been rather uncertain in recent years. The art community has experienced quite a lot of not-so-positive encounters with the so-called Big Money companies. Though this certainly helped the community to grow and was in itself a sort of coming of age experience, it also caused permanent suspicion and distrust, which appears an ineradicable weed, towards just about everything that reeks of money and public development.
Ultimately the most important objective of the community was achieved: the acquisition of the warehouse, so that artists can also be assured of a good and affordable workplace now and in the future.
Incidentally, according to municipal insights, the artist community of the NDSM wharf itself has completely failed. But that aside

And now the area outside our reserve is catching up with time: high-rise buildings, mega-supermarkets, top-location. Top Prices, Top View, and probably Top Residents as well. Who will, no doubt, be greeted with Top Suspicion. 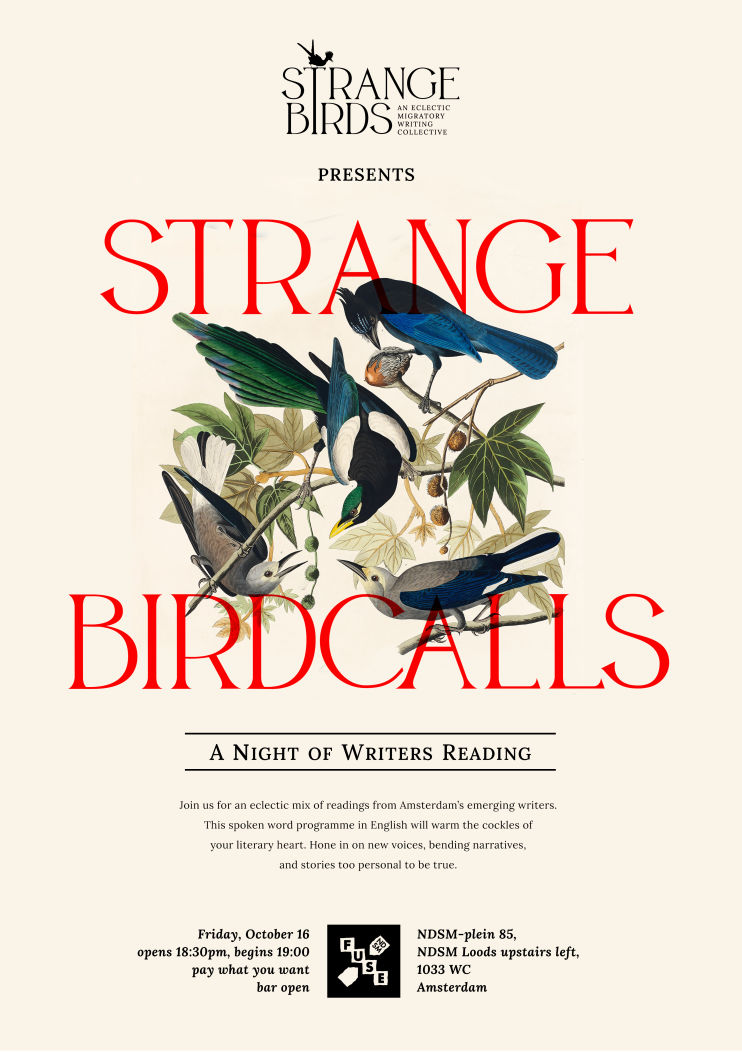 Warm the cockles of your literary heart. Join us for an eclectic mix of readings from Amsterdam’s emerging writers.

Brought to you by Strange Birds writing collective, featuring nine writers from around the world. This spoken word programme in English will transport you to fictional places near and far. Hone in on new voices, bending narratives, stories too personal to be true. Strange Birdcalls signals a new dawn.

In line with health regulations, numbers will be limited and 1,5 metre social distancing and other coronaproof measures will be in place.

About Us
Strange Birds is an eclectic migratory writing community based in Amsterdam which celebrates the word, written or spoken.
We're unbridled creativity that unlocks and empowers cross-cultural, cross-genre, cross-everything dialogues.
We are curious. We embrace new and different perspectives, practices, styles, forms, and voices.
Through feedback groups, craft talks, and events, we want to nurture an open and supportive platform for writers of all stages to bring their work to fruition.

So we write.
We read.
And we write more.

Interested in what we do? Find out more:
https://www.meetup.com/Amsterdam-Creative-Writing-Sessions/ https://www.facebook.com/StrangeBirdsWriting 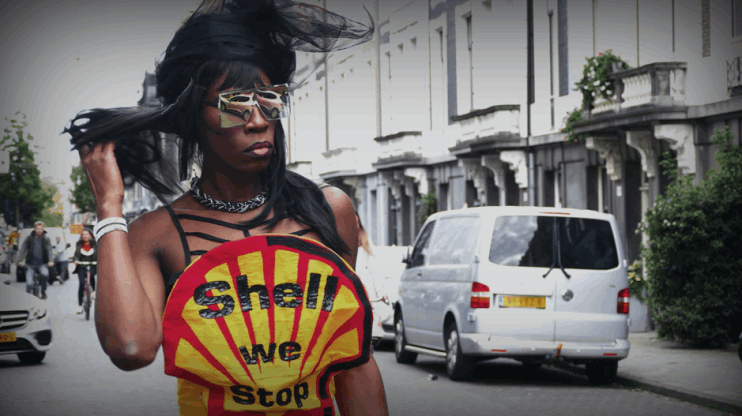 In the context of ongoing court cases brought against Shell in court in 2020 this exposition explores justice struggles that preceded courtrooms. People Powered Movements situated on frontlines and in the streets to redress harm by Shell. What makes People Powered Movements hangry for change? Which forces motivated people to act for justice? How do movements make their move?

Through snippets of erased, eroded or displaced histories the installation AS BELOW SO ABOVE explores earth as a crime scene. The WALL OF PPM piece maps the graph of Parts Per Million(PPM) of greenhouse gases since 1890 till now interjecting the rising curve with another PPM: that of People Powered Movements. There is also space to mourn and honor ancestor elders in the global south who struggled for justice. Featuring photography, posters and relics of actions. Finally visitors are invited with PRACTICE to contribute their message concerning enacting justice. 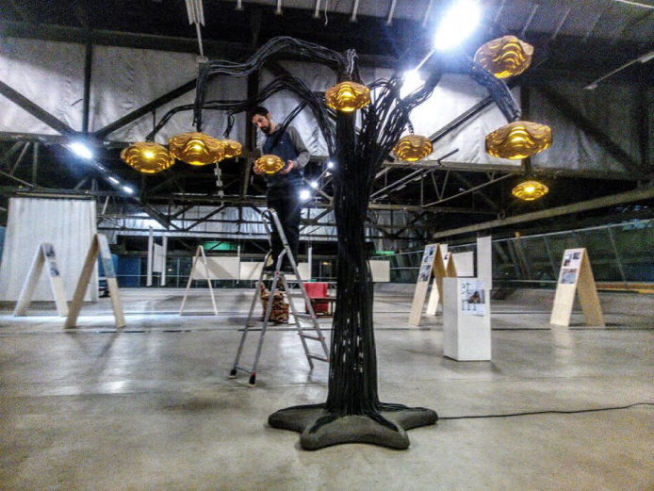 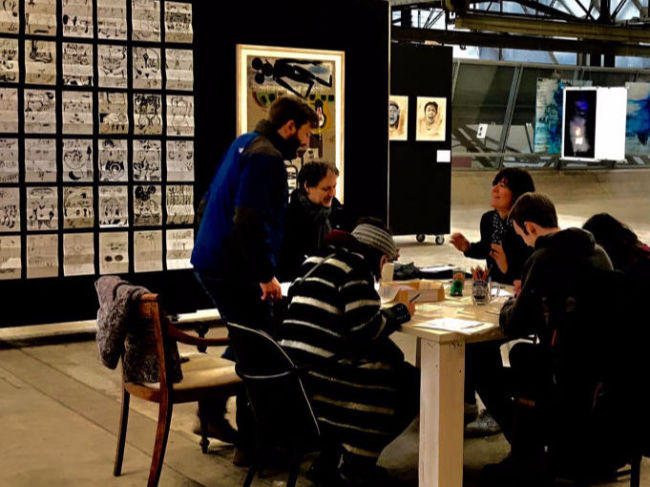 Cadavre Exquis is an ongoing art project by Hopebox and can be joined and experienced on the Fuse floor by all our visitors!